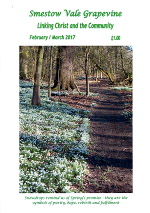 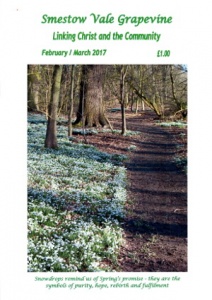 The February/March edition of Grapevine is now out.  In this issue read about the lucky local man who was able to celebrate his 70th birthday riding on the footplate of the iconic “Flying Scotsman”.  Sue Watson who has recently been appointed as Interim Team Vicar within the Smestow Vale Team at Trysull and Bobbington, describes her early years in the probation service and then working with young offenders, before eventually retiring from the criminal justice system and entering the ministry.  Other articles include Richard Baxter, a local puritan, born in Shropshire in 1615, at the time of the Civil War Susan Williams and Dennis Beaumont report on a meeting about the international refugee issue and our local MP, Gavin Williamson send his best wishes to everyone for 2017.  In his “Notes From the Parish Council Chairman, Barry Bond reports upon the final consultation for future housing development in our local area and also the changes in community support across South Staffordshire.  On a lighter note, Roy Wootton has written an article on the National Flute Orchestra, which includes two members from St Benedict’s and which will be giving a concert in the church, early in 2018.  In addition to reports from the local churches and groups, Wendy Meredith reminds us that despite Christmas now becoming a distant memory, winter has still not released its shakes.

If you are not on our circulation list but would like to receive a copy, or take out an annual subscription (£6 for six issues), please contact of the Grapevine team listed on the Grapevine page.