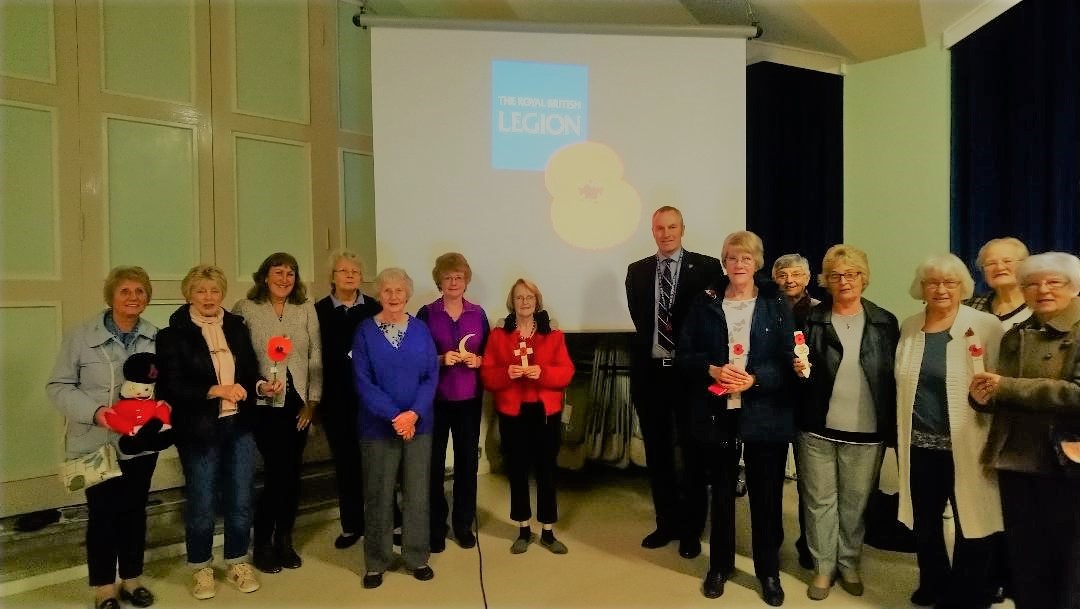 During October wives were treated to a pamper evening by Charlotte from Nicholas Hair and Beauty of Tettenhall. Two of our members volunteered to have relaxing face massages and treatments. We enjoyed sampling the products used and the added treat of each being given a Clarins goody bag with products to try out at home. A very relaxing evening had by all.
On October 25th Mr.Richard Painter a former serving RAF officer gave an enlightening illustrated talk on The British Legion with its growth and changes. Even today the classic poppies are individually made, and displayed proudly alongside various brooches and collectable metal badges and Remembrance boxes with bands etc which have been developed with younger people in mind. You probably may have seen Richard at the poppy stand at our local Sainsbury’s.

Wives members Anne Poole and Sheila Mason tested our general knowledge on Valentine’s Day with a Valentine’s Day quiz. It was good fun. Who’d have guessed the liver was considered as a symbol of love in the Middle Ages?

Susan Williams, (a Licensed Readers at St Benendict’s) worked in Gaudalcanal, one of The Solomon Islands. It was such an interesting evening with a film and slides on The Melanesian Brothers ( who suffered terrible losses during the Tensions from 1998 t0 2003 ), and her work during the two spells she spent working there as a paediatrician and Medical Officer. You will have read the very enlightening article Susan wrote for the Oct/|Nov Grapevine.

During March John Butterworth took us into the world of newspapers with his talk on ‘Editing The Black Country Bugle’. John Wilson, who is involved with ‘The Buddy Bag’ charity explained that a Buddy Bag contains essential toiletries and a teddy and is something children can call their own, to help restore security into their lives when entering emergency accommodation

Our yearly programme can be found in Wombourne Wives blog on St Benedicts Website. Meetings 2nd & 4th Thursdays of each month 8pm at Venerable Bede. All are welcome to join us for any meeting

On 8th November Stephanie Smart, a keen lover of wildlife and conservation took us on a journey following in Charles Darwin’s footsteps on a tour of the Galapagos Islands. After flying into Ecuador and onto San Cristobel her first encounter and lasting memory was of seeing a sea-lion reclining in the High St. There followed stays on other islands as well as day trips on small boats. No big ships are allowed and licenses are required with strict time limits for visits to many locations Through a slideshow and film clips we saw Blue and Red footed Boobies, Pelicans, Gannets, Guanos, Herons, Bottlenose Dolphins, White tipped Sharks, Ghost and Hermit crabs, giant Saddleback and Dome tortoises, explaining how their numbers had dwindled through predators from a population of 20,000 + in Darwin’s time to just 3,000. Hopefully with the aid of the Research Centre they are now increasing in this wonderful, unspoilt but remote part of the world.
On our last meeting for 2018 we welcomed back Siddique Hussain, with ‘Music in Films’.. We rested our memories in recognising music and songs and the film they all came from – Lawrence of Arabia , Jaws, Star Wars, Mary Poppins, and Brief encounters just to mention a few. Some of our members were so knowledgeable on the films.